Another whoosh-by-week from where I'm standing and
I'm zipping in with this post as I'll be heading out soon!

This week is Colour week and we are looking for
Jewel colours and I'll warn you I've gone a bit mad this
week, especially with Clearly Besotted goodies. Quite by chance
Simon Says Stamp - Wednesday Challenge are featuring CBS!
So I'll be jet-setting over there with this little bundle!

For some jewel colour inspiration I popped onto Pinterest and
here's the image that caught my eye and sent me into butterfly mania ... ... and it looks like my fellow Teamie, Anita had the same idea as we've both
used the CBS butterfly duo die! Then again we are both self-confessed
completely BESOTTED CBS addicts so it was going to happen sooner or later! 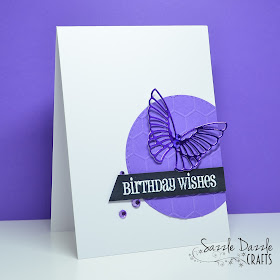 I'm calling it 'Amethyst' and as well as the CBS die, the sentiment
is from their Say it in Style set and I've used the Simon Says Stamp
Stitched Circle die with a Darice honeycomb embossing folder and
some gems of course for a bit of glitz and glam! 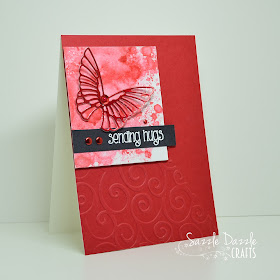 This one's 'Ruby' of course and another CBS sentiment from Say it in Style
with a Distress ink-splattered background panel die-cut using MFT die-namics
pierced rectangle dies and a Sizzix embossing folder with a few more gems and
nail heads to coordinate. 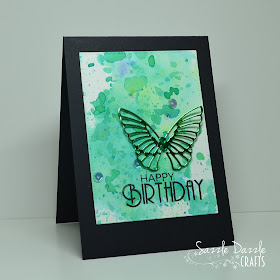 You'll never guess this one!!! Yep! 'Emerald' Using a Brushos-created background
(my first attempt at this medium and likely my last based on the horrendous mess
I got myself in! And the desk and the floor!) Oh! another sentiment from the same CBS set 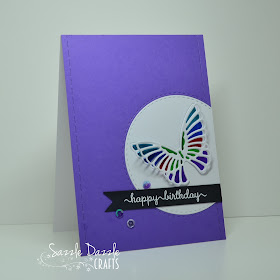 This is what started it off as I tried to combine multiple jewel colours on one card
by die-cutting butterflies in different coloured foil card to then inlay the little
bits and bobs from the wings! I die-cut another outline to sit on top for added
dimension with an inlaid circle die from Simon Says Stamp: Stitched Circle dies
For detail to the sides of the panel Paper Smooches: Dots and Dashes.
The sentiment is another CBS one but this time from the Sweet Little Sentiments set.

I think all these intricate little bits should warrant a trip over to
Pixies Crafty Snippets Playground for this one!

I hope you are still with me as this one doesn't feature a
butterfly! In fact I've gone all Christmassy and used those
jewel coloured gems as the decorations on my Christmas wreath. 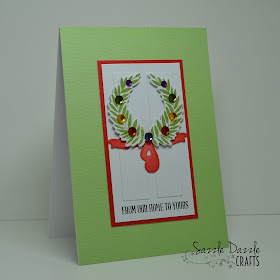 Another CBS frenzy though using the 'Joy to the World' stamp set
and dies and the Geometric I die set to hopefully create a 'door'!
The sentiment is from Uniko: Rustic Christmas and I tried to pick out
some 'rainbow' coloured jewels so that I could drop this in at
Merry Monday for this week's challenge.

Ok that's all from me for today and if you've stayed with me to the end
of this then you deserve a medal! I truly appreciate your time and visit.

Have a fun week and I'll catch up with you again soon. Thank you for taking the time to comment!
In line with new Data Protection legislation (GDPR) by commenting you do so in the knowledge that your name & comment are visible to all who visit this blog and thereby consent to the use of that personal information for that specific purpose.